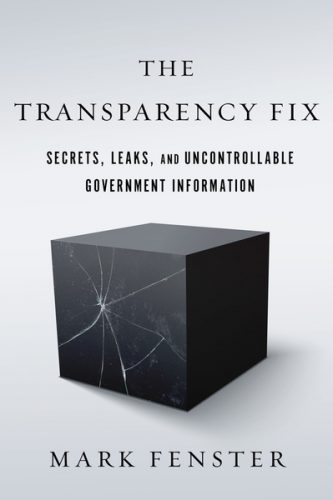 Mark Fenster
Is the government too secret or not secret enough? Why is there simultaneously too much government secrecy and a seemingly endless procession of government leaks? The Transparency Fix argues that we incorrectly assume that government information can be controlled. The same impulse that drives transparency movements—from activists who want stronger open government laws to the digerati who want open data—also drives secrecy advocates like Dick Cheney. They all hold the mistaken belief that government information can either be released or kept secure on command. And when released, both sides assume, this information will have a predictable effect: for transparency advocates, it will give us an authentic democracy and efficient government, while for secrecy advocates, it will make our nation less secure and prevent our government from functioning.

The Transparency Fix argues for a reformation in our assumptions about secrecy and transparency. The world did not end because Julian Assange, WikiLeaks and Edward Snowden released classified information. But nor did their disclosures alter our democracy or create significant political change. Using a variety of real-life examples to examine how government information actually flows, Mark Fenster describes how the legal regime’s tenuous control over state information belies both the promise and peril of transparency. He challenges us to confront the implausibility of controlling government information and shows how the contemporary obsession surrounding transparency and secrecy cannot radically change a state that is defined by so much more than information. The Transparency Fix breathes new life into what has become a tired and tiresome debate about government information by challenging us to confront the implausibility of controlling it.

Mark Fenster is University Term Professor and Cone, Wagner, Nugent, Hazouri & Roth Tort Professor at UF’s Levin College of Law, where he has taught since 2001. He’s the author of two books, The Transparency Fix: Secrets, Leaks, and Uncontrollable Government Information (Stanford University Press, 2017), and Conspiracy Theories: Secrecy and Power in American Culture (University of Minnesota Press, 2nd edition 2008). He received a BA from the University of Virginia, a PhD from the University of Illinois (Champaign-Urbana), and a law degree from Yale.

Please RSVP if you plan to attend