Southern Legal Counsel: Using the Power of the Law for Social Change 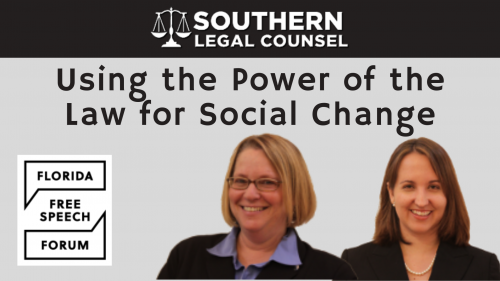 Southern Legal Counsel is a statewide public interest law firm based in Gainesville. We will discuss how we use the power of the law to change systems, safeguard liberties, hold governments accountable and end discrimination.

Jodi Siegel has been an attorney with Southern Legal Counsel since 1985, and became its Executive Director in July 2004. A predominant portion of Ms. Siegel’s responsibilities at SLC is in representing individuals with disabilities in a variety of forums. She has litigated class and individual actions involving federal constitutional and statutory actions under the Federal Civil Rights Act, the Federal Rehabilitation Act, the Americans With Disabilities Act and the Individuals With Disabilities Education Act. She also has presented extensively to various groups on special education and other issues.

Kirsten Anderson joined Southern Legal Counsel in 2007 as a staff attorney and became the organization’s Litigation Director in 2016. She litigates complex civil rights cases in state and federal trial and appellate courts and in administrative forums. Since 2007, she has directed SLC’s Ending Homelessness Project which utilizes litigation, policy advocacy, community education and outreach to remove legal barriers to ending homelessness. She is a frequently invited speaker on social justice issues, particularly on the civil and human rights of homeless individuals.

Please register by Thursday, May 9th.