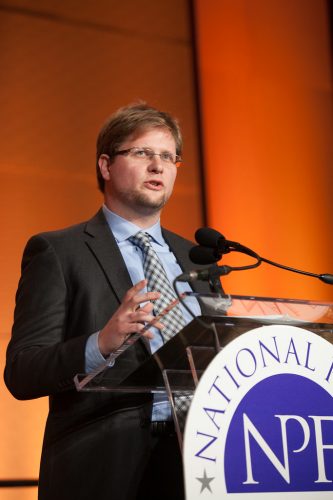 Adam Playford will speak about the challenges and opportunities facing local investigative journalism in the digital age.

He is a deputy editor at the Tampa Bay Times, overseeing the newspaper’s eight-person investigations team. His team includes both reporters and computer programmers who aim to reveal cases of regular people being hurt by powerful forces outside their control. The team was a finalist for the Pulitzer Prize in 2019 for its reporting on a troubled surgical program at a prestigious children’s hospital.

Playford came to the Times in 2015 to help reboot the paper’s data journalism team. Reporters on that team contributed analysis and design for projects that won Pulitzer Prizes for investigative and local reporting in 2016. In recent years he has regularly taught journalism courses as an adjunct lecturer at the University of Florida.

Before becoming an editor, Playford was a reporter on the investigations teams at the Palm Beach Post and Newsday. He reported on Long Island police officers who abused their authority, faulty Palm Beach County voting machines and local corruption in both places. At Newsday he was part of a team that was a finalist for a Pulitzer Prize in 2014.

Playford graduated from New York University’s Gallatin School of Individualized Study and was the editor-in-chief of NYU’s student newspaper, the Washington Square News.